Our stop on the Neverending Blog Tour this week is His Innocent Bride by  Kryssie Fortune!! 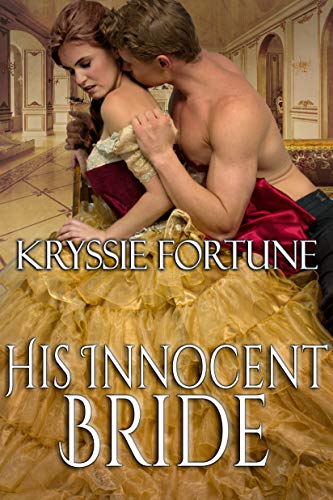 Going about her mundane life in a small fishing village, Alethea never dreamed she would end up with a man like the Earl of Deanswood, yet when she caught the handsome gentleman’s eye he wasted no time in making her his wife. Unbeknownst to Alethea, however, her conniving mother has convinced Deanswood that she has no interest in the marital bed. Devastated by his seeming disinterest, Alethea searches for someone to instruct her in the ways of enticing a man.

When a friend informs Deanswood of Alethea’s plans, he decides to train his new bride himself. Soon enough, Alethea finds herself naked, blindfolded, and helplessly bound as she is thoroughly spanked and then brought to one blushing, quivering climax after another. But when Alethea’s life is threatened by her mother’s vicious scheming, can Deanswood protect his innocent bride?

Publisher’s Note: His Innocent Bride is a stand-alone novel which shares the Regency-era setting of Wickedly Used. It includes spankings and sexual scenes. If such material offends you, please don’t buy this book.

Legs trembling, arms extended, she took a step forward. When she heard the door close behind her, she took off her blindfold. She stood in the room that had horrified her yesterday. She should hate this, but determined to please her tutor, she studied the two ways he could restrain her. The thought of a flogging terrified her, so she decided on the spanking bench.

Turning to the wall covered in floggers and paddles, she wondered which to choose. The smaller the better, she thought. Or maybe a large one would spread the pain. She tested a few against her thigh.

The small bendy one felt like a branding iron against her skin. The large one hit too many nerves. Finally, she decided on one about the size of her tutor’s hand. Polished smooth, she loved how it felt beneath her hand. Since it had small circles cut into it, it shouldn’t hurt so much. She hoped.

Paddle in hand, she opened the door and replaced her blindfold. “You can come in now.”

She’d hoped to catch a glimpse of her tutor, but she didn’t. Was he handsome? Dark-haired like Viscount Stonehurst? Or blond like her husband? Knowing she could walk past him in the street and not recognize him hurt.

She heard another door close then her tutor was at her side. “You decided on a spanking, then. Let’s get you into position.”

He seemed to enjoy carrying her since he picked her up again. When he set her down, he took her arm. “Kneel on here, chick.”

Nervous, she clambered onto the lower platform of the spanking bench. He pushed her torso forward, pressing it into the top platform. “Good girl. Now stretch your arms out.”

Once she’d found her balance, he moved around her and fastened her wrists into the restraints. Alethea whimpered and tested her bonds. There was no give in them.

Thoughts of what would come next made her heart pound. Even restrained, her hands shook. She could call a halt and walk away, but then he’d never give her another lesson. That was a price she wasn’t willing to pay.

Gritting her teeth, she sighed and rested her cheek against the cold leather. The position thrust her bottom in the air. She wriggled, trying to find a position that would lessen the pain of her spanking. There wasn’t one. When he bunched up her skirt, she froze.

Reaching between her legs, he caught her honey on his finger then slid it between her lips. “Taste yourself. Your juices are like sweet ambrosia.”

Obediently, she swirled her tongue around his finger. He hitched in a breath, and as if needed to show her who was in control, he brought his hand down on her bare bottom.

She yelped and tensed her arse cheeks. “That hurts.”

He slapped her again. “It’s meant to. This won’t be as easy a spanking as yesterday. I’ll start with my hand then when you’re ready, I’ll use the paddle.”

Be sure to one click this hot Regency era romance today!!

Kryssie reads everything and anything, from literary fiction to sizzling romance. Her earliest memory is going to the library with her mother. She can’t have been more than two at the time. Reading, especially when a book’s hot and explicit, is more than a guilty pleasure. It’s an obsession.

Kryssie loves to visit historic sites, from Hadrian’s wall to Regency Bath. The first book she fell in love with was Georgette Heyer’s The Unknown Ajax. After that, she devoured every regency book she could. Part of Kryssie’s psyche lives in in in Regency London. She longs to dance quadrilles and flirt behind fans. Of course, Kryssie’s heroines do far more than flirt.

You can find Kryssie online: