Our stop on the Never-ending Blog Tour this week is Cassie on the Move by PK Corey!! 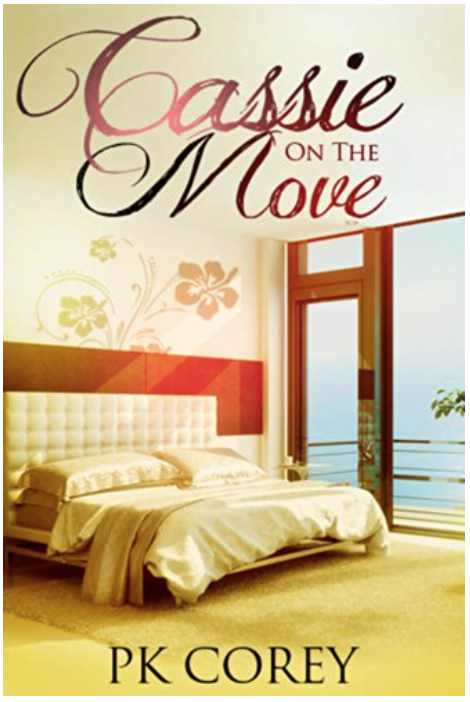 Cassie is on the move and loving life. Through paint-ball game in the woods and a water park adventure she’s gets to know her new neighbors as the new house is renovated.

Cassie is traveling too. From trips with just the girls to conventions, vacations, and cruises with Tom and friends, she’s always ready for the next adventure. But when Cassie begins having dizzy spells Tom thinks a slower pace is in order. Getting Cassie to slow down and take care of herself proves to be quite a challenge. A challenge Tom is more than determined to take on.

I planned to sneak over and surprise Tom as he finished his work for the day. But the plan didn’t go as I’d hoped. We were still in the yard when I heard Tom call down from his study window, sounding annoyed, “Cassie Jane, what are you wearing? Get inside this minute.”

I was mortified. Kate and Allie were with me and I felt like Tom had chastised me like a child in front of them. As we came into the living room, there was an awful, uncomfortable silence. I wished that they would excuse themselves to save me a bit of embarrassment, but I supposed they were staying to assure Tom that many of the adults did dress up for Halloween.

I couldn’t help being a little angry with Tom. There was no reason he had to be so stuffy all the time. He had sounded annoyed, almost angry, from the window. I only hoped he would be discreet in front of Kate and Allie. They had worked so hard pulling all this together. I was afraid Tom would embarrass me and hurt their feelings.

Hateful feelings churned in me as I heard him come down and I turned my back to the stairs. Looking away from Tom was something I often did when I was annoyed with him because I knew it aggravated him.

He spoke my name as he came into the room, but I was angry by then and I didn’t turn around. I was startled when he barked sharply, “Cassie Jane, look at me when I’m speaking to you.”

I’m not a child. I threw caution to the wind as I wheeled around to attack before he could. But when I turned I was utterly speechless at what was before my eyes.

Never in my wildest dreams! My Tom, dressed in full pirate regalia. He looked incredible. I could only stand and stare. He had on a puffed-sleeve shirt with a leather vest, and a sash was at his waist as well as a very real-looking sword. High leather books came nearly to his knees. I had a hard time taking it all in. Looking back at his face, I saw a delightful glint in his eye as I spotted the earring in his ear. Tom with an earring – not a sight I’d ever thought I’d see in this lifetime. I don’t believe the man had ever looked better.

That old pirate stalked right over to me and kissed me in front of everyone. I just couldn’t take my eyes off him. Lingering at my ear, he whispered, “Far too much cleavage for a lady, but we’ll discuss that later tonight.”

Be sure to one click this hot contemporary romance today!!

About the Author After spending thirty-six years in two careers I liked just fine, I’ve finally found my dream career as a writer. I’ve been happily married for thirty-six-years and my sweet husband has gotten used to the unique experience of living with a writer. He is very encouraging and an excellent editor when he’s pressed into service.   I’ve been intrigued by spanking stories since before I first saw Ricky spank Lucy. Stories of this nature were hard to come by before the Internet and the ones I found were a little harsh on discipline and very much lacking in love. So, I made up my own stories and enjoyed these in my head for years. I finally began writing them down. Although the lovely women in my stories are spanked often, the love between them and their men takes top priority. My Cassie’s Space series shows a mature couple who are deeply in love. Despite loving Cassie’s free-spirited ways, Tom is determined to keep her safe, even if it takes a trip over his knee. And with her friend Sue by her side and all they get into, a trip over his knee is very likely. My Cal’s Law series, is about a younger couple. Though they come from very different backgrounds, love and discipline draw them together.  I love my husband, my kids, my cats, reading, writing and hearing from my readers. Amazon